I Chocolate Blog
The Lake Champlain Chocolates blog, where you’ll discover the latest news from the factory, tutorials, and all things chocolate!

How is Maple Syrup Made?

Can you believe that maple syrup, the sweet, golden liquid poured over waffles and pancakes, starts out as mostly water? Real maple syrup begins as sap collected from sugar maple trees. This sap, which has a high water content, is then condensed down until the sugar content is higher than the water content. As simple as this sounds, the process of making maple syrup has many steps and is largely at the mercy of the weather.

Facts about How Maple Syrup is Made 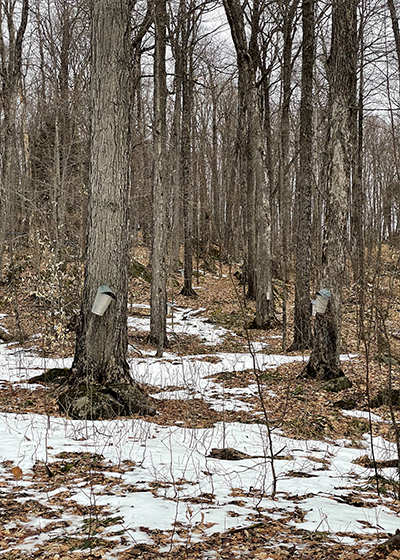 During late winter in Vermont, the weather starts to show hints of spring. Even though the nighttime air temperatures still fall below freezing, the daytime temperatures begin to rise above freezing. While this weather may create a quandary for deciding whether or not you need to wear a heavy coat outside, the freezing nights and warmer days are perfect for making maple syrup! Typically, this weather occurs in the middle of March and lasts for several weeks. Once the temperatures warm up past 50°F, the trees start to bud, and the sugaring season is over because the sap will have developed an off-flavor. 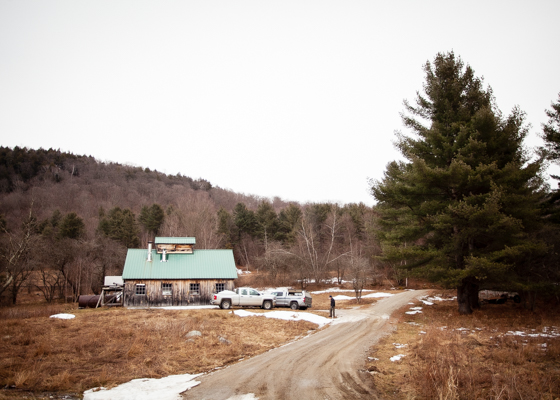 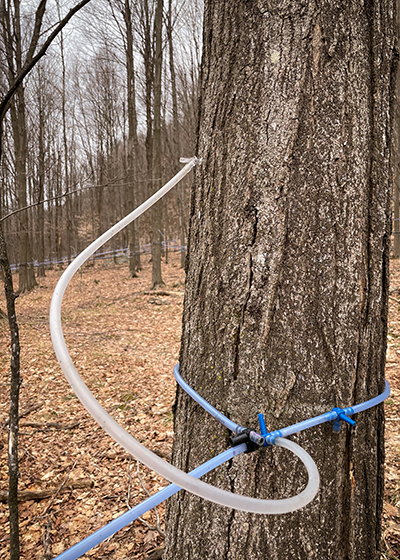 It all boils down to…

In order to collect the sap from the trees, to make real maple syrup, you first need to tap the trees. Farmers start this process by drilling a small hole into a maple sugar tree. Then a metal or plastic spout is inserted into this hole. When the weather warms up to above freezing during the day, the sap will start to run or drip out of the spout.

David Allen, Lake Champlain Chocolates’ maple syrup producer, starts tapping his trees around Town Meeting Day (the first Tuesday in March). In the 1970s he started his operation in Shelburne, Vermont with 600 taps. Now in Starksboro, Vermont, Allen has 4500–4700 trees with over 5200 taps. While this may sound like an overwhelming number Allen said that a typical commercial maple syrup operation will have over 50,000 taps! The smallest maple trees tapped are 10 inches in diameter. Larger, 15-inch trees are the optimum sap producers, and 20-inch trees can have two taps. While older trees may produce less sap, the sap from those trees has a higher sugar content.

Once the sap starts to run, it flows from the taps through a total of 5,700 ft. of thin tubing that converges on a large 20,000-ft long main line that carries the sap down to the collection tanks next to the sugar house. These collection tanks hold 3,750 gallons of sap! With the sugarbush located uphill from the sugar house, the whole sap collection system runs on gravity with a little help from a vacuum pump for added efficiency. 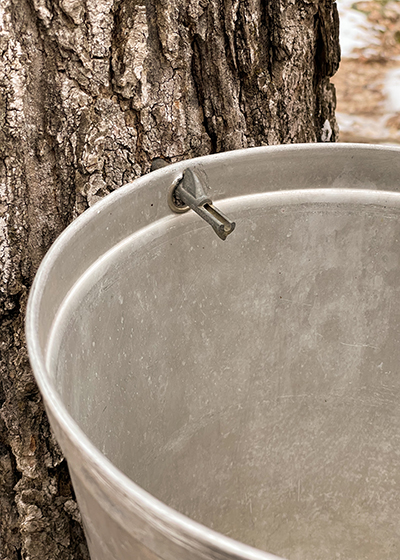 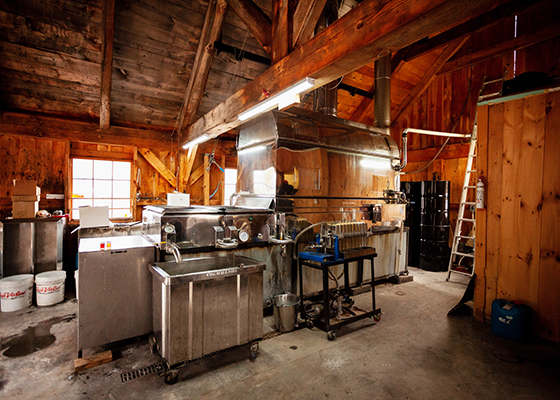 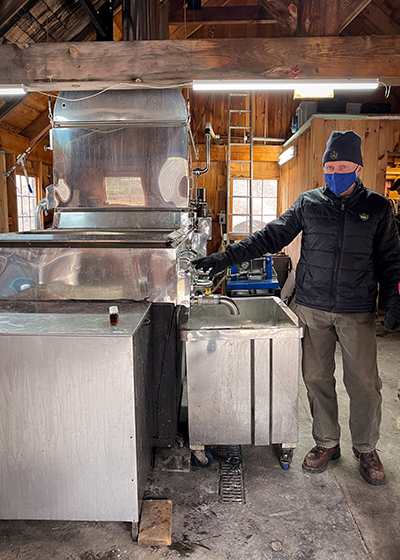 Once the maple syrup is made, it is filtered, graded, and bottled. Grading maple syrup is the process of assessing the color, flavor, density, and clarity. Sugarmakers use a standardized grading kit as a guide. The first sap of the season produces light-colored maple syrup with a delicate flavor. As the season progresses, the color tends to darken, and the flavor intensifies. The four grades of maple syrup are Golden Color with Delicate Taste, Amber Color with Rich Taste, Dark Color with Robust Taste, and Very Dark Color with Strong Taste. Amber Color with Rich Taste tends to be the most popular for general eating and baking. The maple syrup made at the end of the season that is Very Dark Color with Strong taste is best for cooking and baking because of the intense maple flavor. Here at Lake Champlain Chocolates, we love to use Grade A Dark Amber in our Maple Crunch Chocolates of Vermont and Maple Caramel Bar because of the intense maple flavor that it adds. 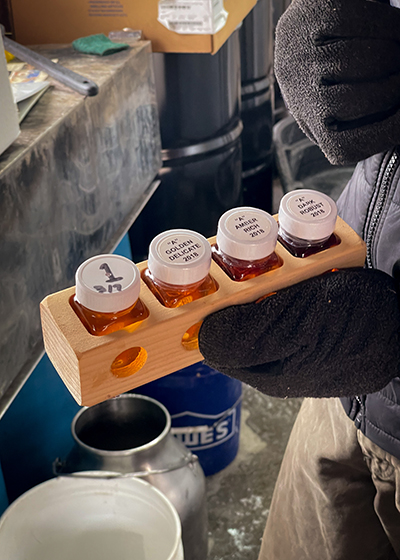 There are so many ways you can use maple syrup. Veteran maple syrup producer, David Allen, enjoys maple syrup in maple walnut pie, black pepper maple cream pie, granola, in a maple latte, and as the classic pancake and waffle topping. For additional ways to eat this delicious liquid delight try it in baked goods, as a coffee sweetener, or to enhance cocktails. You can even jazz up roasted veggies with a splash of maple syrup. And of course, it also pairs well with chocolate. Try our Granola Five Star Bar® featuring dark chocolate and maple-infused granola. 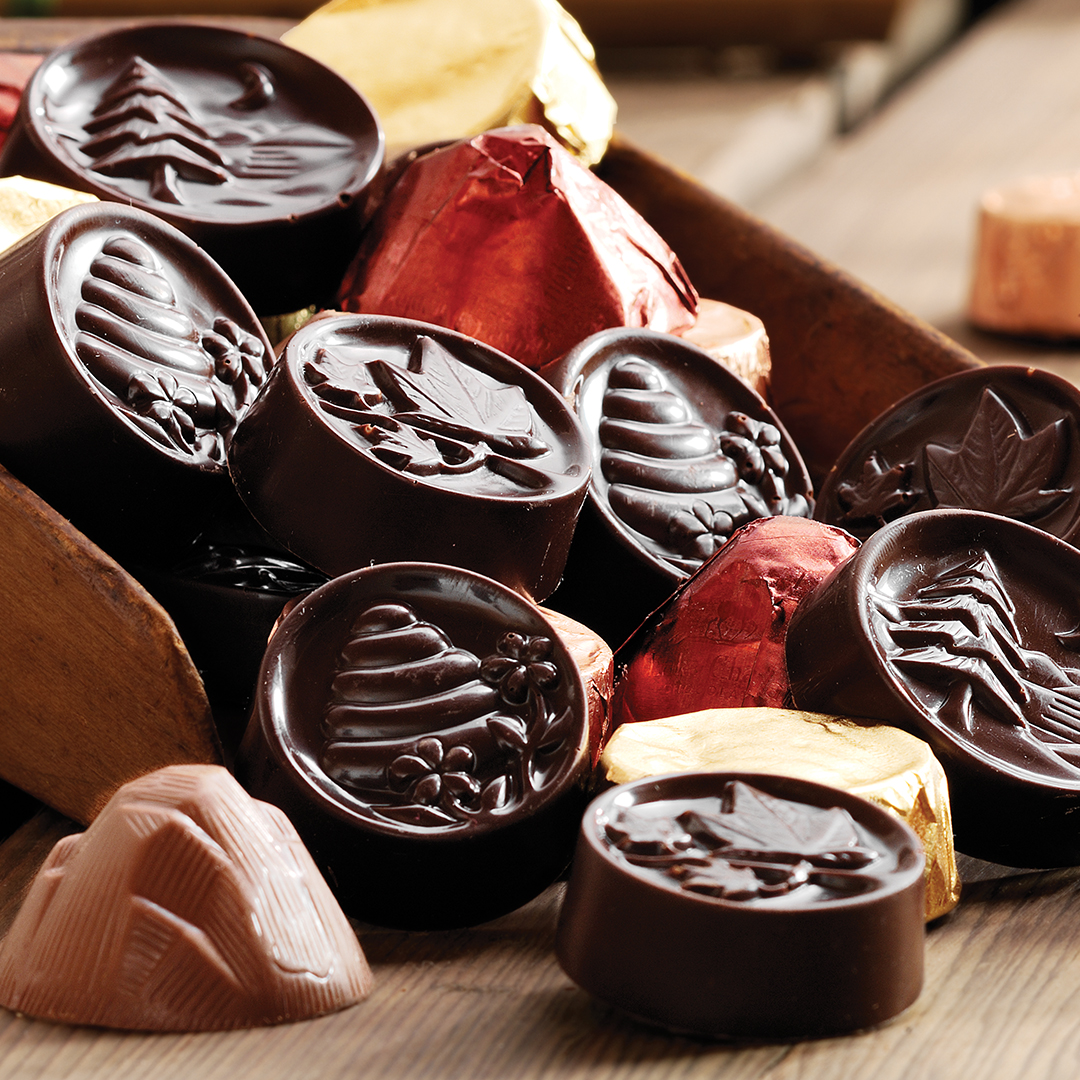